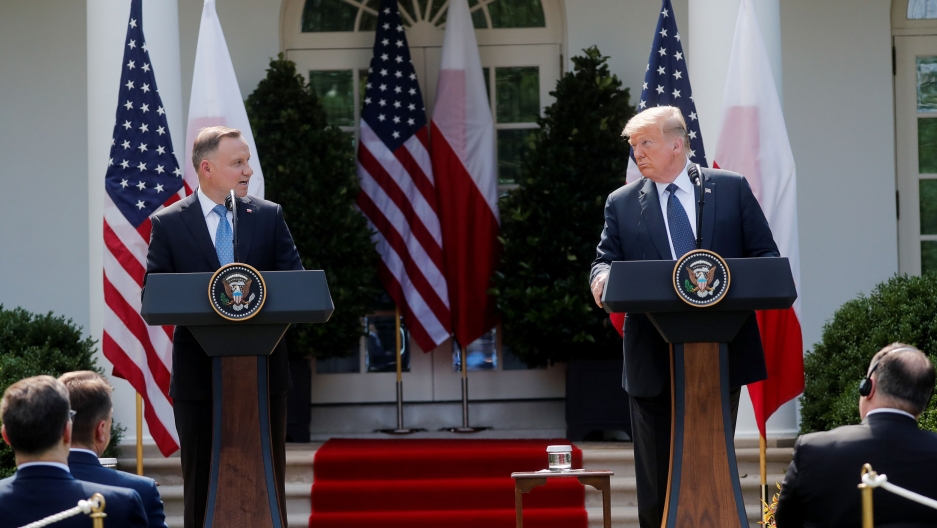 US President Donald Trump holds a joint news conference with Poland’s President Andrzej Duda in the Rose Garden at the White House in Washington, DC, June 24, 2020.

US presidents don’t usually meet with world leaders days before a presidential vote. But this week, President Donald Trump welcomed President Andrzej Duda of Poland to the White House just ahead of Poland’s national election this Sunday, in which the conservative Duda is running a tough reelection bid.

From the Rose Garden, Trump, a Republican, did his best to give Duda a “Trump bump.”

Related: Young people in Poland are rediscovering their Jewish roots

From her vantage in Warsaw, author Anne Applebaum says Duda’s photo-op with Trump might have gained him points at home. Or it might be a gamble that doesn’t pay off.

“… it was a kind of clear intervention in the election.”

“Those in his party thought that this meeting would be a kind of slam dunk reason to vote for him, and they played it up as a great diplomatic success,” Applebaum said. “Those who aren’t going to vote for him thought it was a very strange thing for the American president to do. I mean, it was a kind of clear intervention in the election. There was no other purpose to the meeting. There was nothing achieved. There were no documents signed. It was a long trip to get a photograph.”

Applebaum is a Pulitzer Prize-winning historian and expert on central and Eastern Europe. Her forthcoming book is called “Twilight of Democracy: The Seductive Allure of Authoritarianism.” Applebaum spoke with The World’s Marco Werman about the presidential meeting and Trump’s indication he may move US troops out of Germany to Poland — and how Russian President Vladimir Putin’s efforts at historical revisionism play into security considerations on NATO’s eastern flank.

Related: How Russia laid the groundwork for future disinformation campaigns

Marco Werman: The two presidents have met one-on-one five times in recent years, three times at the White House. How do you understand their alliance? What can they actually do for each other?

Duda has also been pushing for additional US troops in Poland. He’s offered to build a Fort Trump in Poland. And just this week, President Trump confirmed he has plans to move more than 9,000 US forces out of Germany, sending some — not clear how many — to Poland. So if that does happen, what will be the upshot for NATO and security on Europe’s eastern flank?

Everybody in Europe would like to see the US commit more troops and be more present. The disturbing piece of the story is that it seems as if Trump’s reasoning for moving troops out of Germany isn’t to do with security or to do with calculations about where those troops would best be placed. It seems like it’s some kind of revenge against Angela Merkel, the German chancellor, who refused to come to Washington recently, saying that she didn’t think the timing was good and it wasn’t a good moment to have an international meeting in the middle of the pandemic. 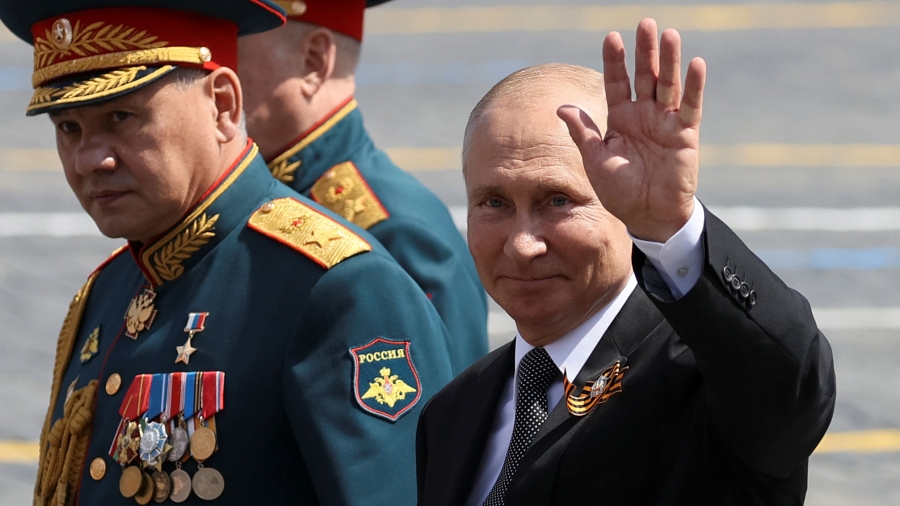 Russia’s President Vladimir Putin and Defence Minister Sergei Shoigu leave after the Victory Day Parade in Red Square in Moscow, Russia, June 24, 2020. The military parade, marking the 75th anniversary of the victory over Nazi Germany in World War Two, was scheduled for May 9 but postponed due to the outbreak of the coronavirus disease (COVID-19).

So from the West, Trump talks about pulling out of NATO. In the east, Russia’s President Vladimir Putin has been offering up a revised history lesson. Putin just published in a conservative magazine a 9,000-word essay on World War II, defending the Soviet non-aggression pact with Hitler. He describes the occupation of Baltic states as “with consent.” How is it going over in Eastern Europe?

What he’s referring to is the Hitler-Stalin Pact. The two dictators actually divided Europe up between them. And so Hitler invaded western Poland. The Soviet Union invaded eastern Poland. And Putin now wants to rewrite that piece of history and somehow imply that it was Poland’s fault, that Poland got invaded and that it was somehow the Baltic states agreed to be invaded. There is no historical justification for it at all. Nobody is sure why it is that Putin has chosen to make this argument right now. I think it’s part of a bigger effort that he’s been making in recent years to rewrite the history of the 20th century in order to make the Soviet Union more heroic and to make our memories of it more heroic and triumphant.

Related: This pact between Hitler and Stalin paved the way for WWII

Putin’s essay was being pushed precisely during this week of the annual Victory Day parade in Moscow, which was postponed because of the coronavirus. Is Putin in a position to celebrate “great power status” at this moment?

The kind of argument he’s been making to the Russian people over the last several years is, “OK, your wages are not going up. The economy is not great. There’s a lot of corruption. But I’m making Russia great again. I am restoring Russia. I’m putting her back in the center of world politics where she belongs. And you should keep me in power for that reason.” But the point of your question is correct. Russia remains a very dangerous, but medium-sized power. The Russian economy is weak, and it’s weakened partly by low oil prices. But it’s also weakened by really profound corruption and very profound inequality as well, which has caused a lot of discontent. There have been, just under the radar, on and off over the last couple of years, quite a lot of protests and a lot of dissent, not just in the big cities, not just in Moscow and St. Petersburg, but all over the country. And he’s very anxious to damp that down.

I’m just curious. In Warsaw, is talk of this revisionist history making Poles at all nervous?

So whenever the Russians start to revise history, Russia’s neighbors become nervous because Russia has used historical revisionism as an excuse to invade its neighbors in the past. Right now, that seems unlikely. It doesn’t seem that Russia wants to pick a fight with the United States and with NATO at this exact moment. But, you know, we began this conversation by talking about the American president’s weak commitment to NATO. Maybe this is something that Putin sees in the future he’ll be able to take advantage of.

This interview has been edited and condensed for clarity.