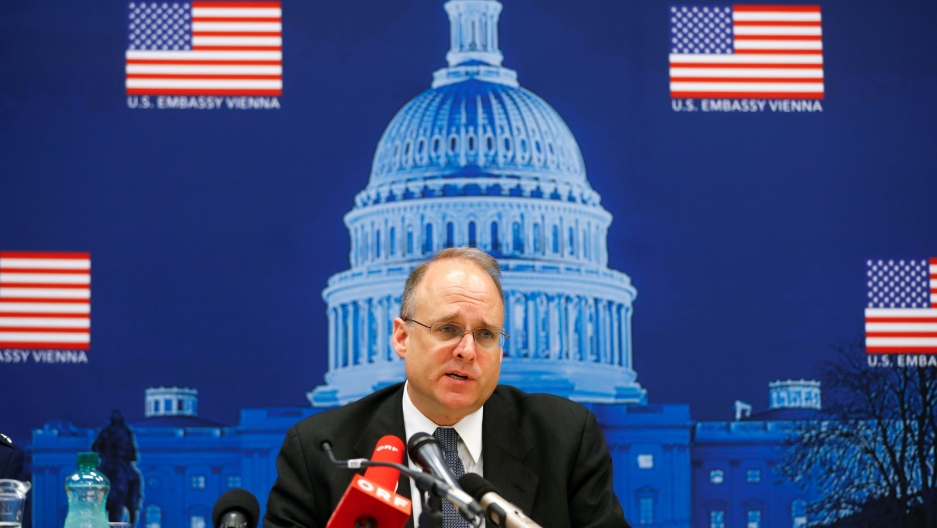 US special envoy Marshall Billingslea speaks to the media after a meeting with Russian Deputy Foreign Minister Sergej Rybakow in Vienna, Austria, June 23, 2020.

The United States and Russia have about 91% of the world’s nuclear warheads. And the arms control pact — the New START Treaty — between the two nations expires next year.

The US wants to broaden its main nuclear arms control agreement with Russia to include all their atomic weapons, a US envoy said on Tuesday after talks with Moscow on a new accord.

Washington wants Beijing involved because it says China is secretly racing to increase the size and reach of its nuclear arsenal, but Moscow favors a multilateral accord, possibly including France and Britain, Billingslea said.

“We, the United States, intend and believe … that the next arms control agreement must cover all nuclear weapons, not just so-called strategic nuclear weapons,” he told a news conference in Vienna that followed the talks there on Monday.

Matthew Bunn is a professor of the practice of energy, national security and foreign policy at Harvard University’s Kennedy School. He spoke with The World’s Marco Werman about the implications of the New START Treaty.

Marco Werman: What are the main points of the current agreement — the New START Treaty, or Strategic Arms Reduction Treaty — and would you say it’s been effective?

Matthew Bunn: The New START Treaty has been highly effective. Both sides agree that the other is complying with its key provisions. It limits the number of deployed strategic nuclear weapons on each side. We don’t face as many Russian nuclear weapons as we otherwise would. And it provides for an extensive set of monitoring and verification. So, we have more predictability and more understanding of what’s going on.

Related: China rebukes US envoy for photo stunt at nuclear talks with Russia

What’s at stake with this week’s negotiations? Where have the US and Russia settled at this point?

Well, it appears they made some progress. They agreed to set up some working groups on particular topics and to meet again, possibly in July. So that’s the good news. They have not yet agreed to any extension of New START. That’s the bad news. The further bad news is that the United States is still insisting on China taking part. And China has no interest in doing so. China has less than a tenth as many nuclear weapons as either Russia or the United States.

So we’ve got a presidential election in November. What signs are you going to be looking for that New START is on track and there will be limits on nuclear arms?

Well, I think we’ll have to watch these negotiations very carefully. I doubt the United States will actually withdraw. But I think that letting the agreement expire — about two weeks into the next president’s term, by the way — is a real danger. My guess is that the Trump administration will not agree to extend New START until the last minute. And so it may be a scramble if Biden is elected, for him to get it extended in the two weeks after he takes office. And I think that scrambling, in general, is not the right way to manage nuclear weapons policy. But I think it’s not just a matter of arms control. It’s a matter of the broader set of measures designed to reduce the danger of nuclear war. Right now, we have the most hostile and dangerous US-Russian relations in decades. We have technologies that are evolving that blur — the line between peace and war — and make it more difficult to prevent escalation from conventional to nuclear war. So there’s a big agenda of steps that have to be taken to reduce nuclear dangers. Ultimately, it’s the governments that have to take action.

This interview has been edited and condensed for clarity. Reuters contributed reporting.