Discussion: The Latino conservative vote in the 2020 election 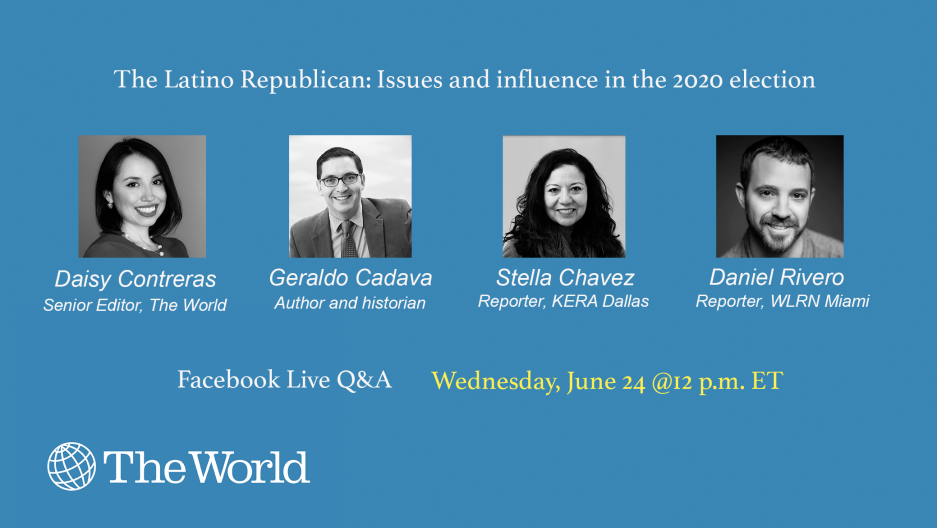 The World is hosting a Facebook Live on the Latino conservative vote titled. “The Latino Republican: Issues and influence in the 2020 election.”

This Facebook Live discussion is part of “Every 30 Seconds,” a collaborative public media reporting project tracing the young Latino electorate leading up to the 2020 presidential election and beyond.

When it comes to the Latino vote in the US, there are two major assumptions: Latinos vote Democratic, and immigration is the most important issue for decision-making.

While the majority of Latino voters went for a Democratic candidate in the 2018 midterm election, about 30% of Latinos in the US-backed a Republican candidate. Over the years, the percentage of Latinos who have voted for the Republican party has stayed pretty consistent.

But conservative Latinos are not a monolithic group, and they do not vote as a block. Issues such as the country of heritage, socioeconomic status and how many generations a family has been in the US could shape their political perspectives and priority issues.

Join us for a Facebook Live on the Latino conservatives on June 24 at noon Eastern time: “The Latino Republican: Issues and influence in the 2020 election.”

The World’s Daisy Contreras will moderate the conversation with Geraldo L. Cadava, historian and author of “The Hispanic Republican: The Shaping of an American Political Identity, from Nixon to Trump.”

Stella Chávez, a reporter for KERA in Dallas and Daniel Rivero, a reporter for WRLN in Miami — two of the eight reporters of The World’s “Every 30 Seconds” project — will be part of the conversation.

The US presidential election in November could be the first time Latinos are the largest minority group in the electorate. Young Latinos could swing the outcome of the election — if they come out to vote. That’s because approximately every 30 seconds, a young Latino turns 18 and becomes eligible to vote.

For the past four months, The World’s “Every 30 Seconds” project has been following the stories of eight young Latino voters in different corners of the United States, reporting on the issues, influences, concerns and challenges driving Latino decision-making and turnout for the election. It’s a collaboration with public radio stations across the US.