Coronavirus upended her family. But this Latina teen is determined to make her vote count. 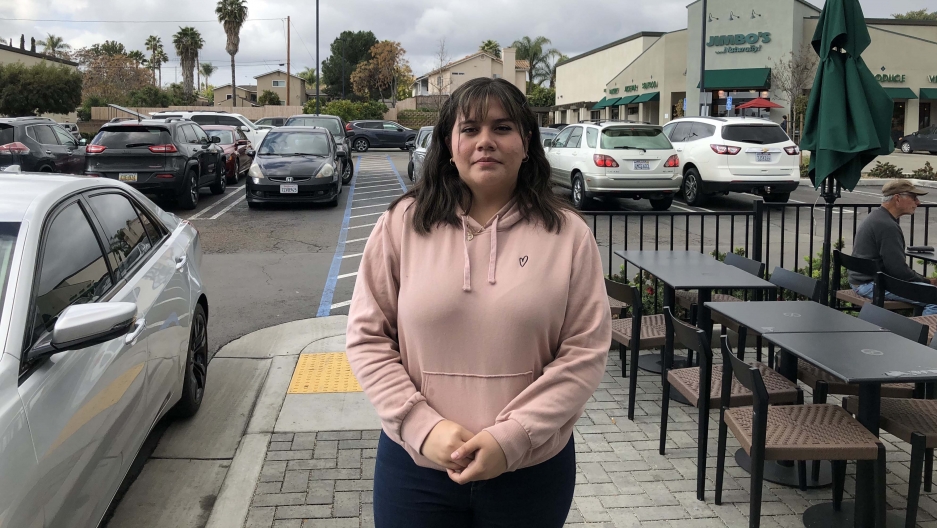 Marlene Herrera, a first-time voter in San Diego County, is undecided when it comes to the 2020 presidential election. The coronavirus has upended the issues she is watching.

Marlene Herrera has her entire life planned out in a color-coordinated notebook. It’s helped the 17-year-old high school senior in San Diego County keep track of her schedule and big events such as grad night, an annual celebration for graduating seniors.

But the coronavirus pandemic has turned Herrera’s carefully planned world upside down. No grad night, no prom, no graduation ceremony. It’s brought a new set of worries: She’s on track to be the first person in her family to attend college this fall, but how will she pay for it? How will her uninsured family members access health care? And when will her mother’s unemployment benefits start coming?

Those concerns are shaping how Herrera views the 2020 presidential election campaign. Herrera is an undecided voter in California, a state where Latinos overwhelmingly support Vermont Sen. Bernie Sanders, who recently dropped out of the presidential race. Sanders beat former Vice President Joe Biden, the presumptive Democratic nominee, by almost 30% among Latinos in California’s March 3 primary election. Sanders also came out ahead 54 percentage points in front of Biden for voters under the age of 29.

“When I found out Sanders left, I was like, ‘Oh, he’s the one who was on our side about college, thinking about health care and stuff, compared to the two we have now,” said Herrera, whose grandparents are immigrants from Mexico. “I don’t know where I stand. Even then, I didn’t know where I stand, but now, it’s even worse.”

So far, experts are unsure whether Biden can convince the nation’s Latinos to support him — and come out to vote for him in November. Latinos are an important voting bloc: They are on track to become the nation’s second-largest voter group this fall after whites, surpassing black voters for the first time, according to the Pew Research Center.

Related: Can Biden turn out Latinos to vote? Advocacy groups aren’t sure.

More than 30.5% of eligible voters in California are Latino, the highest share of any state. While California has become reliably Democrat over the past two decades, its Latino voters are a big enough bloc to swing the state one way or another if they vote in big numbers.

Herrera said she worries the US is heading toward a repeat of the 2016 presidential election, where her family members were turned off by both parties’ failed promises to Latino voters on issues such as immigration and health care.

“My family members, once it came down to the two candidates, they just didn’t vote,” she said of the 2016 race.

Herrera wasn’t yet eligible to vote in California’s primary because she hadn’t yet turned 18. She plans to register to vote after her birthday next month. Still, she was following the election closely before the pandemic hit.

In March, she said she was happy to see Sanders win the California primary. But she acknowledged much of what he was campaigning for — “free this, free that” — was unlikely to come to fruition.

“As much as he wants it to be free, it’s going to take a lot that has to happen to get it to that point,” Herrera said.

Related: Every 30 seconds, a young Latino in the US turns 18. Their votes count more than ever.

‘You can see how tired he is’

Throughout the pandemic, Herrera has split her time between her two parents’ homes. The pandemic has upended their lives, too.

For the first month of California’s lockdown, Herrera and her younger brother stayed with her father, a Mexican American born in the US. He manages a grocery store and has been working nonstop during the pandemic.

“You can noticeably see how much more tired he is,” she said. “There’s times he doesn’t even want to stay up to eat because he’s that tired. A lot of times when he gets home, my brother and I just say, ‘Here’s your blanket, here’s your pillow.’ He does this thing where he passes out on the couch first before he goes to bed.”

While her father was at work, Herrera and her brother were stuck inside. Herrera spent time taking online classes from a nearby community college, doing Zoom classes for high school and gaming. She borrowed her brother’s PlayStation 4 and started meeting her friends virtually in the video game, Grand Theft Auto.

“We joked that we were going to use the pier in the game as our grad night,” she said. She faces the prospect of celebrating her birthday online as well: “You can find me celebrating on the virtual roller coaster.”

Related: This Latino teen voter worries about prom, graduation — and the economy

Herrera just moved back in with her mother, who spent weeks at home sick with flulike symptoms. She never got tested for the coronavirus because she is uninsured and worried about the cost.

While Herrera’s mother was paid during the time she was sick, she was recently laid off from her job at a law office. Her unemployment benefits will help support Herrera and several other family members who live with them.

Californians face a weeks-long backlog to start receiving unemployment benefits. And the family is still waiting for Herrera’s mother’s application to be processed.

But Californians face a weekslong backlog to start receiving unemployment benefits. And the family is still waiting for Herrera’s mother’s application to be processed.

Faced with inadequate health care and a lack of state support, Herrera said she was disappointed to see Sanders leave the race. His platforms focused on expanding programs that have proven to be vital safety nets during the pandemic.

Even with all the uncertainty, Herrera has reasons to celebrate. She was accepted to her top college choices. In the fall, she’ll move to the Bay Area to attend San Francisco State University, where she wants to study psychology.

Herrera said she is closely watching how the country’s health care industry is responding to the pandemic.

Herrera said her family has experienced what happens when health care comes at a cost.

“I am low-income as well. I know that feeling,” she said. “Thank God my little sister and I have [health insurance], but my mom doesn’t. When she gets sick, she needs to just fight through it. She’s worried about how much it’s going to cost. It frustrates me.”

With the pandemic still raging, the US general election is still far from Herrera’s mind.

“Especially because I’m not happy with either of the candidates. Putting aside what I feel for the candidate is different from politically what they’ll bring to the government, and I’ll have to see which one is the best option.”

She said her mom suggested leaving that line of the ballot empty.

But Herrera said she will cast her vote for president. She’s determined to make her vote count in November.

This story is part of “Every 30 Seconds,” a collaborative public media reporting project tracing the young Latino electorate leading up to the 2020 presidential election and beyond.